At the beginning of February, with temperatures below freezing, the willow trees were already displaying their furry, silver catkins.  Then the Redwings arrived: annual visitors from Scandinavia.

In the following poem one senses the slow, silent, mysterious advance of Spring in the countryside.  Entitled ‘The Green Veil’, it was first published by Punch magazine at the turn of the century – author unkown.  It is a favourite of mine.  I hope you enjoy it too.

It was the Willow who first wore it
Until her weaving fingers tore it
On the moss-grown wall,
Weeping, she let it fall.
But Hawthorn with her needle mended it
Washed it and spread it out to dry.
A March wind, galloping by,
Seized it and threw it over Ash and Oak
Who for a joke, tied pale ribbons on it
And made the Almond wear it as a bonnet.
Almond ripped off the bows and took a tuck in it
To make a frill for Chestnut’s wrist
But Chestnut’s treacly thumbs got stuck in it.
Her neighbour, Quince,
Unwound it twist by twist, gave it a rinse,
And by the ivory moon sat all one night
Embroidering it in stars of white,
For gipsy Cherry, Plumb and Pear
To twine in their wild hair. 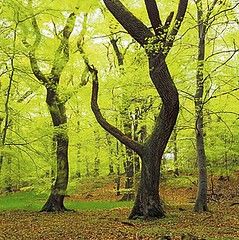 So it is passed and passed
Continuously, from tree to tree:
Used now for this, now for that –
As garland, coronet, hat
And at the last, by Poplar, as a broom
To sweep her room,
And then away, away
Into the auction rooms of May
Where all the rags and riches of the Spring are sold
For Cowslips gold,
And auctioneering crickets pass
Between the tufty stems of grass
Crying, “For sale! For sale!
A green veil.”

“He gave us eyes to see them
And lips that we might tell
How great is God Almighty,
Who has made all things well”
Hymn: All Things Bright and Beautiful

4 comments on “For Sale! For Sale! A green veil”