Many of us take the beautiful nature reserve on our doorstep for granted, knowing little of the origins and history of Fleet Pond.  When Colin Gray of the Fleet Pond Society spoke at our Harvest Thanksgiving Service he was able to tell us how the Pond and town developed.

The area in which the Fleet town and pond now sit (the ‘Crondall Hundred’) was given to the Bishopric of Winchester by King Edgar in gratitude for the clergy’s support for his claim to the throne in 973 AD. 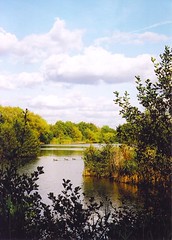 The actual date of the creation of Fleet Pond is unknown, but it is clear that it was a thriving fishery by 1200 AD.  There were originally two ponds, and it seems likely that they were formed under the instructions of the Bishop some time in the 12th Century, when local monks constructed an embankment across the numerous small streams that drained higher land nearby.  The wide pond that was formed was stocked with fish and would have attracted wildfowl, providing a year-round supply of nutritious food for local monks, villagers and tenant farmers.

In the 16th Century the two ponds were leased to the tenant of Fleet Farm for an annual rent of 100 fishes to be delivered fresh to Winchester.

In 1567 a huge storm wrecked the embankment of the second pond, and since it was considered too expensive to repair, permission was given by the Bishop to convert the land to pasture.  It is thought that this is the area where Ancells Farm now lies. 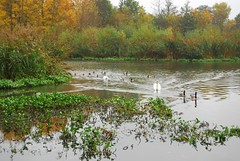 In 1836 the London and Southampton Railway Company purchased Fleet pond from the Dean and Chapter of Winchester in order to construct an embankment across the northwest corner for the London to Southampton line.  Fleet Pond was seen to be an attraction, and in 1847 Fleet Pond Halt was built to bring Victorian Londoners to the pond for bathing, picnics, horse riding, boating and skating in winter.

A few years later, in 1854, the British Army acquired Fleet Pond as part of the large area of training land required by the newly formed Aldershot Garrison.

The pond proved to be such an attraction that the wealthier Londoners began to build large country houses nearby, and these formed the beginning of Fleet town.  These houses were built away from the pond itself as at that time the pond was much bigger and the adjacent land was too boggy for house construction. 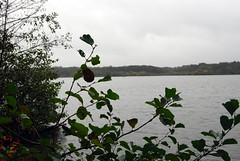 Gradual lowering of the pond outflow weir allowed housing to be built closer and closer to the pond, and now houses look out over the water.

The most recent chapter in the pond’s history began in January 1973, when the Army sold the pond to Fleet Urban District Council (now Hart District Council).  It was soon after this that the Fleet Pond Society was formed, when an enthusiastic group of local residents joined together to ensure that Fleet Pond became a valuable local asset.

To read what Mr Gray had to say about the work of the Fleet Pond Society, click here.

For more detail on the history of Fleet Pond, click here.