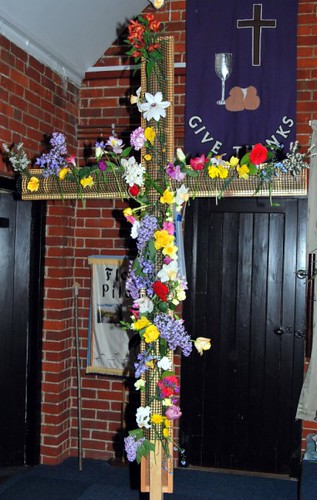 This Easter Sunday, many people attending our morning service responded to the invitation to decorate a rough-hewn wooden cross with individual flowers of their choice.  The result was rewarding.  The combined colours of twenty or more varieties included bluebells, camellias, daffodils, forget-me-nots, heathers, lilies, narcissus, pansies, polyanthus, roses, tulips and violets.  A very splendid and colourful showing.  At least seventy-seven contributions were visible.

There are many stories of how the power of the cross of Christ has affected people from different backgrounds and in different ways.

Here is a true story* from thirty or more years ago, about a young soldier, a member of the Parachute Regiment.  Ken was just 23 years old and was married with a baby daughter.  He fell ill and was diagnosed with cancer so widely spread that it was beyond treatment.  He asked if he might be sent home to be nursed by his wife for as long as possible.  The Army readily agreed.  Moreover, a team of three Army nurses was posted to the vicinity of Ken’s home to help his wife with the 24-hours nursing he required, and in particular to administer pain-killing drugs.

Ken was brought home just in time for Christmas, at which point the local Minister belatedly heard of the situation and started to call to sit for a while at Ken’s bedside, not to speak of religious things, but simply to offer comfort and tell him how brave he was being.

By that time Ken was very ill indeed and could be observed watching the clock as the minutes passed before his next pain-killing injection.

Came the evening of Palm Sunday, and the visitor offered Ken his own Palm Cross, saying “if you would like it, just nod your head”.  Ken didn’t just nod his head: ever so slowly he raised both hands, took the cross and put it in his pyjama pocket.

When the Minister next called it was Good Friday, and Ken’s wife asked him to the kitchen for a preliminary chat.  “We’ve had such a strange day,” she said, “this morning he wouldn’t settle…  kept moving his right arm about as if pushing something away.  And then I suddenly noticed that when the nurse had changed his pyjamas she had forgotten to put the Palm cross into his clean pair, so I fetched it and put it where it belonged, and since then he’s been…  Well, you’ll see when we go in.” 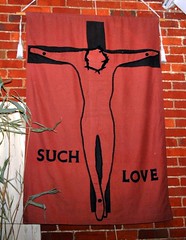 So they went in to Ken’s room, where he was lying quite still, his right arm across his chest and his hand still holding on to his cross.  and so he remained until he died just at noon on Easter Monday.

The young paratrooper was never able to voice what that cross meant to him – he could not speak at all.  But whatever it meant to him must have been so powerful that when other comforts – including drugs – failed him, he just groped for his cross and, having found it, held it until he died.

**In the week ending Friday 22 April 2011 a Christian electrician won his fight to display a Palm Cross in his van, following an outcry from Christian, Hindu, Muslim and Sikh leaders.