The Cross of Jesus has an incredible power to affect people’s lives.  There are numerous stories of how His Cross has influenced people in the most unexpected ways – both young and not so young.  Here is a true story which illustrates an event which no one involved could have foreseen.

A church member suggested to the Elders that as Good Friday approached the church might consider mounting a cross on the wall at the end of the church, illuminated after dark by floodlights. 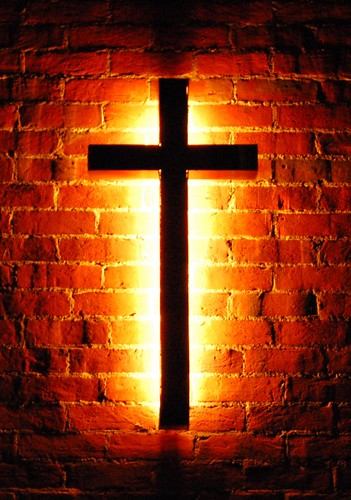 A wooden cross, some twelve feet high, was constructed.  It was painted white and was mounted on the brick wall.  As dusk fell the floodlights came on.  It was visible from many local thoroughfares and in the darkness was impressive.

That Saturday evening, when local people started to wander into town, a man came into view.  He was walking briskly, his figure silhouetted against the floodlights.  Then, after a few steps he suddenly stopped.  He had seen the cross.  Its unexpected appearance had startled him, as it would startle anyone seeing it for the first time.  Then he took off his cap.

The man resumed his walk, but now more slowly – almost like someone sleep-walking.  He stepped off the pavement, crossed the grass to the foot of the brick wall, and knelt down, bareheaded, beneath the cross.  This made quite an impression by floodlight.

This man’s behaviour was quite out of character, as he was well known locally and had often been brought before the magistrates for causing a disturbance after closing time.

What the Sign of the Cross meant to him we shall never know, but whatever it meant must have been very powerful – so powerful that it moved him to an act of piety and respect which was quite out of character.  Out of character for him – and most unusual in this day and age.