“He’s gone!” cries Joseph at the empty tomb:
But Mary says, “He’s left a word for you:
He cannot rest content to be your past,
So he has risen to be your future too.”** 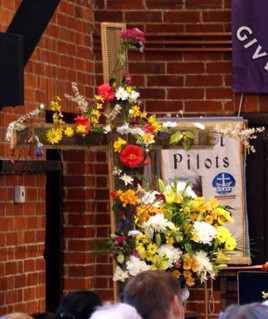 Worshippers at our morning service this Easter Sunday decorated a rough-hewn wooden cross with spring flowers and seasonal blossoms.

The cross of Christ has an incredible power to affect people of all races and callings.  There are many stories of how the Cross of Jesus has influenced the lives of people, often in most unexpected ways.

Here is a true story.*

A small group of complete strangers waiting for a train started chatting to one another.  The conversation turned to World War II, and one of the men, a German, mentioned that he had served in the German Army on the Eastern front, been captured by the Russians, and then held long-term in a Siberian prison camp.  “That must have been grim”, someone said.  “Yes, it was not good,” replied the German, “but I remember the good things as well as the bad.  May I relate to you one good incident?”

His story was this:

One day in his prison camp he had stumbled upon a whole cigarette.  This was so great a treat that he searched for somewhere unmolested to smoke it.  He knew that one corner of the camp was a rubbish dump in which a fire always smouldered, but this was out-of-bounds to prisoners.  He took a gamble and slipped away to savour the cigarette. 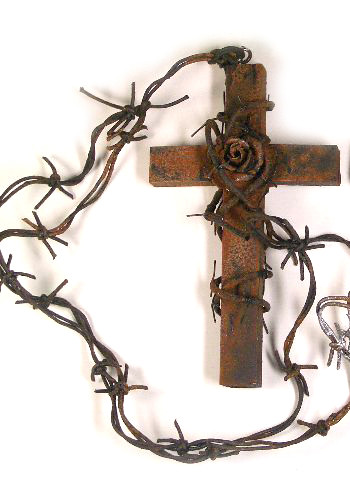 Unfortunately he was seen by a Russian guard who crept up behind him and, with the butt of his rifle, knocked him to the ground.  As he lay stunned and helpless, he saw the Russian fix his bayonet and hold it close to his heart.  He was certain that he was about to pay with his life for his breach of discipline.

It so happened that this German had been brought up as a Catholic, and he recalled from childhood that at the moment of death one should make the Sign of the Cross.  He did so, and then closed his eyes.  But nothing happened.

As he slowly opened his eyes he saw the Russian walking away.  Moments later he saw the same guard returning with a glass of milk in his hand.  The guard gave the German the glass of milk and then took two cigarettes from his pocket, gave him one and lit it for him.  Neither man spoke the other’s language, but the Russian guard sat down on a log and beckoned the German to sit beside him.  There the two sat smoking, smiling and nodding to each other before he was allowed to rejoin his fellow prisoners.

We can only guess what the Sign of the Cross meant to that Russian.  But whatever it meant, it was so powerful that in a grim Siberian prison it overcame the enormous barriers of national enmity, language and status which lay betweeen a prison guard and his prisoner.

** The opening poem was written by Canon Vanstone when he was a young curate, and so ill that he thought he would never work again.