A Pilgrimage Based upon the

‘Letters to the Seven Churches’

When we received our travel itinerary from McCabe Pilgrimages, the names of the places we were to visit – Istanbul, Bosporus, Izmir, Pergamum, Ephesus – promised that our trip to Turkey would be both exotic and Biblical. 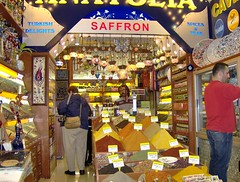 Soon we were off to Istanbul, a city on two continents – Europe and Asia – with a population more than twice that of London.  It is an amazing city of contrasts, where in one glance you can see mosques and minarets, churches and towers, markets and bazaars, palaces and shacks, the historical and the modern.  Carving through the city is the Bosporus, with its bridges, cruise liners and ferries, as well as the many narrow roads packed with parked cars that seemed to dare the bus driver to find a way through them.  Our three days there were not enough. 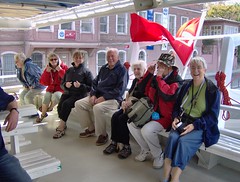 Our party had people of various denominations and churches.  We were URC from Fleet and Twickenham, Roman Catholics from Fleet and Farnborough, and Anglicans from the New Forest and from Wharfedale.  We were a happy band, and we all got on very well.

From Istanbul we flew to Izmir.  Our guide from Istanbul (Art) came with us, and gave us an excellent insight into what we saw from the coach and in the places we walked.

Stephen Thornton enhanced the tour with his leadership and knowledge of the Biblical connections with the people and places in the Revelation of St John of Patmos (particularly in St John’s Letters to the Seven Churches).  Among these were: 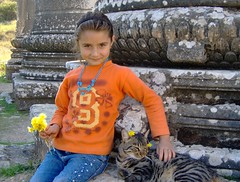 Thyatira, which in its day was a garrison town on the trade route;

Sardis, with its ruins of a gymnasium and synagogue with stunning mosaics.  At the temple to Artemis near the church, a little girl collected wild flowers for visitors and to adorn her kitten.

Pergamum, where ‘Satan’s Throne’ gives great views across the country.  The theatre there is overlooked by the acropolis and the ruins of the Temple of Trajan.  There is much evidence of the engineering skill that was employed in constructing these beautiful buildings. 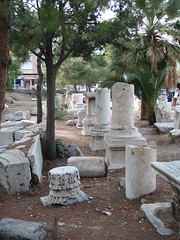 All in all, this was a great journey and pilgrimage.  My memories are many: apart from meeting and making new friends, highlights for me were the technical aspects of the buildings and town planning.  Above all, I was impressed by the tremendous faith of the Christians at the time the Letters to the Seven Churches were written.  This faith has endured all trials as it has been passed down the ages, while the buildings and false gods lie in ruins.

You can see additional photos from the trip on the Gallery page.