From 10th to 19th November, my husband Michael and I went on a Pilgrimage, led by the Reverends Stephen Thornton, Rosemia Brown and Henderson George. The Pilgrimage took us to Jerusalem and the Sea of Galilee. Stephen and Rosemia alternated in leading the Worship at the Biblical sites and also at the evening Devotions held at the Hotels. We all got along very well. 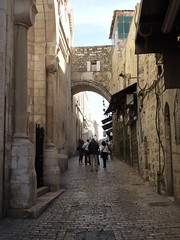 We spent the first two days in Jerusalem visiting the Mount of Olives, Gethsemane and Mount Zion and retracing the steps of Jesus along the Via Dolorosa to the Church of the Holy Sepulchre.

On Friday we had a trip to Herod’s Fortress at Masada and also to the Dead Sea. Here at the Dead Sea we paddled and we floated, giving a rather more “Tourist” like day. 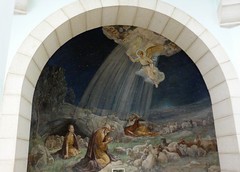 On Saturday we visited the Shepherds’ Fields and the Basilica of the Holy Nativity in Bethlehem. We celebrated the Holy Communion Service at St George’s Cathedral on Sunday morning before visiting Jeel al-Amal Boy’s Home in Bethany.

It was at Bethany that we experienced the effect of the Wall. It has cut off the main Jerusalem to Jericho road, turning a short drive via the Mount of Olives into a twenty-mile detour. We also had to wait a long time getting through the check point out of Bethlehem.

On the following day, Monday, we travelled to Tiberias via Jericho, again having to detour. On the way, we visited a Palestine Agriculture Relief Committees (PARC) Project which, like Jeel al-Amal, our Church helps to fund. 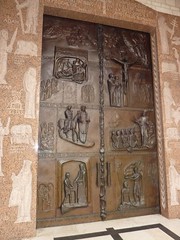 The last day was spent around the Sea of Galilee, visiting Capernaum, the Mount of Beatitudes and the lakeside Churches of Tabgha, before returning to Tiberias across the Sea of Galilee on a replica fishing boat. 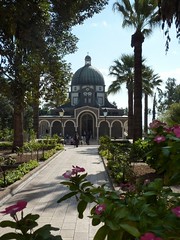 This Pilgrimage today was in November rather than in August, which it was  the last time we visited the Holy Land in 1999. The weather this time was noticeably cooler and more comfortable. However, the days were noticeably shorter due to the autumn days, meaning that we could not visit everywhere that we had visited in 1999.  I especially missed visiting the Church of the Ascension, Yad Vashem and Bethphage. I am told that autumn is the peak time of the year for Pilgrimages and we certainly saw a great many people round the sites. We had to queue for over an hour to enter the Grotto of the Nativity. 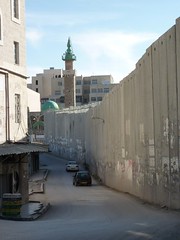 The wall caused the Palestinians to have great difficulty in selling their craft produce. We had special shopping stops at an olive wood collective in Bethlehem (we have a stall of their goods at Christmas at Church) and a craft pottery (where our Church flower vases come from) in Jericho. That added some weight to our suitcase on the return journey!

This is my second Pilgrimage, and while I find I still tend to think somewhat like a tourist, I can concentrate more on the Spiritual aspect as I become more familiar with the Biblical sites. I expect to become a more able Pilgrim the more I visit the Holy Land. We are hoping to visit “The Holy Land” again in 2019. 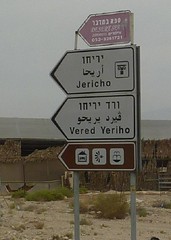 The first time we attended the Holy Land in August 1999, I did not really understand what was being presented to us. However, since this, I have been studying a Training to Learn and Serve (TLS) training course for three years. The studying has helped me immensely. During the second visit to The Holy Land, I felt that I understood very much more of what was being presented to us.

I also felt that I understood some of the problems which faced the present day Biblical Scholars: how they have to take into consideration all of the evidence which they have, and estimate from this what would have most likely have happened 2000 years ago. 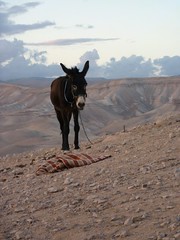 In particular I noticed how difficult the journey from Jerusalem to Jericho in fact was, having now seen the terrain of the desert for myself. There were thousands of sand dunes, all of which looked identical. One could easily get lost out in the middle of nowhere.  The loose sand underfoot would have been very tiring, with the sand giving way under every foot step taken. 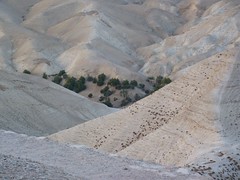 Worst of course is just how easy it was for a thief to hide in among the dunes and to run out and attack an unsuspecting traveller. (As in Jesus’ parable.)

Christine and I both now need to reflect upon the Pilgrimage and to ponder upon it for a few years. We will definitely be going again, but not for about a further ten years.