Our Bible Study on 18 June started with a discussion on genealogy, and the ease of tracing our family history in this computer age.

The Minister read the genealogy of Jesus Christ from Matthew Chapter 1, then invited us to make four groups to study the baptism and genealogy of Jesus in Luke’s Gospel (Chapter 3, verses 21-37). We were asked to discuss and note the differences in the two accounts.

Many differences were observed, but notably that four mothers were mentioned in Matthew’s Gospel – and none in Luke’s. Each of our groups was allocated one of these mothers to study in more detail. The Bible references for the four women are: 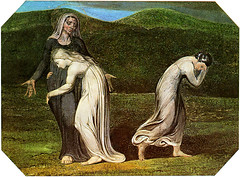 We were asked to think about what was different about these women, what attributes made them stand out, and why God had chosen them.

They were all foreign – non-Jews. They had been abused or used and suffered, but rose above their problems and difficulties to be strong and courageous. Their sons all featured in the genealogy of Jesus, so perhaps God was telling the Jews they weren’t the only chosen ones.

It was a good study, and the Minister reminded us that women do have a place in the church. We are all to use our gifts and talents in service, and not sit back doing little because we are women. Although we may be impressed by the educated, the clever and confident, the stories of these four mothers reminds us that God most often uses those we may think are unworthy.

Picture: William Blake, 1795: Naomi entreating Ruth and Orpah to return to the land of Moab