Our New Testament Bible Study focussed on the story of the woman who anointed Jesus as he was dining with some friends. 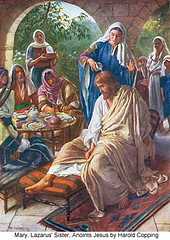 Without consulting our Bibles, and in small groups, we were invited to recall what we could of this story:  ie, what happens, who is involved etc.  When we came together to compare our versions it was surprising how much our recollections varied.  Some remembered that it was Jesus’ head that was anointed, some his feet.  Some thought that the woman was Mary Magdalene and others that it was the sister of Lazarus.  Some thought that she was a sinner.  Many recalled that hair and expensive ointment were involved, and that it had been said that the ointment should have been sold and the money given to the poor. 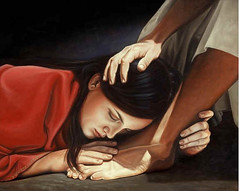 The truth is that there are four different versions in the Bible – each Gospel has a variation of the story and they differ quite considerably.  We compared the four Gospel stories and noted the ways in which they varied.  Stories change as they are handed on, and when people re-tell them they alter things to suit the particular point they want to make.  Noting that Mark’s version is the oldest, it was interesting to discover how each of the later writers had re-interpreted the event to give a different emphasis.

In Mark 14 verse 9 Jesus says: ‘Truly I tell you, wherever the good news is proclaimed in the whole world, what she has done will be told in remembrance of her.’   Would the woman in the story be surprised that her story is still remembered?   What might she want to say to us if she came to our church now?   How would she explain her actions?  These thoughts led us to a personal consideration of how we would want to be remembered ourselves, and what stories might be told in remembrance of us. 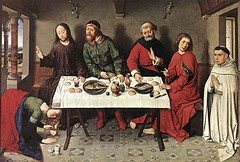 As a final exercise, we were invited to write down something we would want people to remember about Jesus.  This was an opportunity to consider what Jesus means to us, and to reflect on the importance of handing on this message to others ‘in remembrance’ of Him.  We shared our thoughts with one another before ending the evening in prayer.