Anne Dawes, a visitor to our website, was interested to read the various comments submitted by pilgrims from our church after they visited Oberammergau in June.  Anne wrote that she had wanted to go to see the play for years, and that she was really excited about her forthcoming visit after reading our impessions.  She has now sent us her own account, and it is clear that the experience more than lived up to her expectations:

I thought the whole experience was absolutely awesome! It must be wonderful to be brought up in that village with so much tradition and to imagine yourself appearing from childhood in different roles.  Our hostess at the Pension was in the choir and her little girl went with her on her performance days.  We talked to a woodcarver whose family were original signatories of the Vow.  He had started out as the little boy who carried the water at the Last Supper and then a decade later played John, then James, and in 2000 was Nicodemus.

We thought Judas was really interesting and the person we would have liked to talk with.  I always felt sorry for Judas because somebody must have been destined to be the Betrayer.  I thought the storyline was sympathetic and plausible.  We also liked the strong involvement of Joseph of Arimathea and Nicodemus.   Annas was just poisonous.

I had not expected the music to be so wonderful and did not know beforehand about the Old Testament tableaux and the fact that there would be live animals.  The scene where Jesus swept the merchants from the Temple was made so real. 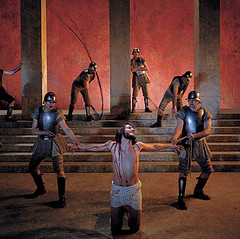 The emotions displayed and the sufferings of Jesus and his friends and the crucifixion will stay with me a long time.  When Jesus called ‘Vater!’ from the cross it was so heartrending.  The Resurrection seemed so well done and so full of hope.

We were staying right opposite the Catholic Church which we liked.  We were able to go to Mass in English and to the Son et Lumiere (in German) in the Church.  Our Pension was beautifully painted with frescoes on the wall and inside had painted ceilings and furniture.  We also loved the Museum with the wonderful crib and the History of the Play.

I have just had some friends round for tea and a look at all my Oberammergau books and things.  It was wonderful just telling them all about it!