A message from our Interim Moderator, Revd Iain Stewart: 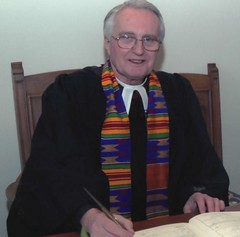 Having been appointed as your Interim Moderator, it was thought good that I gave you a little of my background.

As you may know, I come from Scotland, a highlander, from Ardnamurchan (you can look it up!).

I have served churches in Scotland, as a Church of Scotland minister, and in England – first in the Presbyterian Church, and then in the United Reformed Church.

My first church in England was in Canterbury, where I served for 19 years.  I then received a call to the URC in Cheam.  Both these churches were called St Andrews, so you can imagine they were very Scottish in their worship.

Reaching retirement age meant that I had to retire from Cheam, but I accepted a part-time call to the church in Tooting, where I served for another eight years.

I have been more fully retired since 2005, but I still keep busy with taking services most Sundays, and serving in other ways when invited.  So I may be with you for a long or short time.  I am pleased you are so far along the road, with your profile nearly completed, and only a few loose ends to tie up!

My friend and minister, Graham Hoslett, is Interim Moderator at Beacon Hill, so between us we hope you can be settled sooner, rather than later.  Do pray that the Lord will lead us all to find the right person to serve your churches.  “He is able to do immeasurably more than all we ask or imagine, according to His power at work within us, to Him be glory in the church, and in Christ Jesus throught all generations, for ever and ever! Amen.”