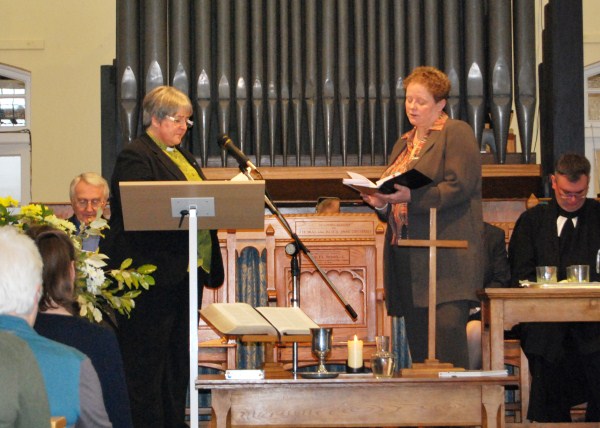 A Service of Induction of Revd Ruth Dillon to the Joint Pastorate of the United Reformed Churches of Fleet and Beacon Hill took place at Beacon Hill URC, Hindhead, on Saturday 23 February 2013.

In her Statement, Ruth likened her calling to the circus acts she had so enjoyed as a child.  With God as the Ringmaster, she would at various times require the courage of the lion tamer, the dexterity of the juggler, the balancing skills of the tightrope walker, and the mask of the clown.  She did not promise never to fail in her endeavours, but with God’s help she would do her very best.

The Secretaries of Fleet and Beacon Hill, Moray Henderson and Christine Dean, told how their churches had felt led to call Ruth to minister to them.  Elders and members of the two churches and Ruth’s daughter Hannah read from Scripture, led the congregation in prayers, and presented Ruth with symbolic gifts representing her new ministry.  Representatives of the Synod and local churches were also invited forward to welcome Ruth.

Following the Service the congregation were invited to stay and share refreshments.