Many congregations these days are suffering because of a dearth of practical gifts available from the people.  When asked in Church Membership classes what their gift is, folk often say they haven’t got one.

So at Church Meeting we had a look at Paul’s first letter to the Church in Corinth. Paul used to spend time in a town, first preaching in the synagogue.  When he was no longer welcome there he would go into the market place, library, or other public place, and preach the good news of Jesus.  Some would dismiss the message; some would be interested and come again; others would hear and believe. 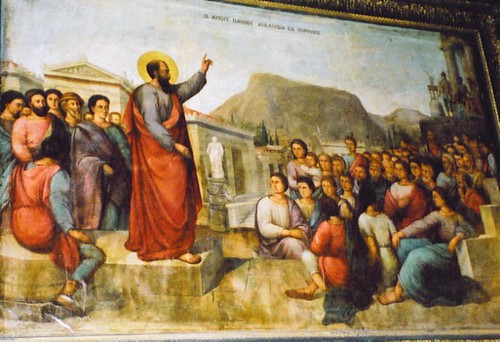 Eventually, with a group of believers gathered in a house, Paul would say farewell and move on to another place, and follow the same strategy.

It must have been very daunting for those new Christians.  So young in the faith, surrounded by Greek and Roman idols, working out what it meant to be a Christian witness. 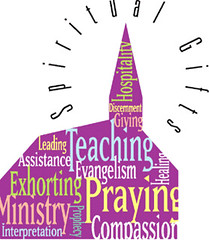 Clearly they too struggled with the issue of shortage of gifts, so Paul writes (Cor 1, v 7) about there being a special gift in each person.

He provides a list of such gifts, and there are other lists in his Letters, all different, making it clear that these lists are not the sum total, but examples of the vast variety of gifts God gives to people to be used in the Church and in the world.

What are your gifts?  And how are they being used in the service of God?  For, as the name implies, they are not yours, but gifts to be used for the Giver.

Picture:
Detail from painting in the Church of the Assumption of the Virgin Mary in Ancient Corinth commemorating St Paul’s preaching