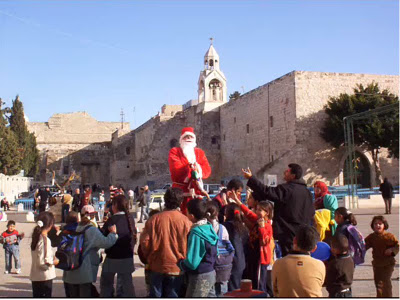 “The little town of Bethlehem looks gloomy in spite of all the Christmas decorations that the local authorities are adding to it.  Yes, wherever one goes in the town one will notice these decorations.  But still the JOY of Christmas and the PEACE Christmas brings around are lacking.

Jerusalem, which lies only eight Kms to the north of Bethlehem, is out of reach for most of the city inhabitants.  Without special permits issued by the Israeli Military Occupation Palestinians, Christians and Moslems alike cannot reach Jerusalem for their religious practices.

2000 years ago it was the Romans who were occupying the country, but they didn’t forbid Joseph and Mary from reaching the town where Mary gave birth to the King of Peace.

May the King of Peace through His guidance make us in this region understand the needs of each other and work hard to achieve Peace.”