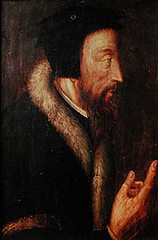 Our Bible Study on 16 July paid homage to Protestant reformer John Calvin, at the 500th anniversary of his birth.  Yet as we remember and celebrate this significant event in the history of the Reformed Church, the Minister reminded us that we are here not to mimic Calvin and Luther, but to learn from them, and continue their task.

Some key texts of the Reformation were considered:

But you are a chosen race, a royal priesthood, a holy nation, God’s own people, in order that you may proclaim the mighty acts of him who called you out of darkness into his marvellous light. (NRSV)

Previously the church hierarchy – Pope, Cardinals, Bishops and priests – governed all that was said and done in the name of the church.  Only the clergy took the bread and wine, read and interpreted the Bible, and said the prayers.  One of Luther’s first questions was whether this is Scriptural.  This innocent question got him thrown out of the church. 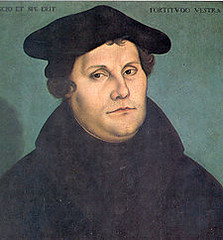 Since there was no other church to go to, Luther created his own – the Lutheran Church, based on the teaching of Jesus and the calling of the twelve, who were the first of millions.  Luther saw that Christ’s victory on the cross changed the pattern of what had gone before, so that now we can come directly into God’s presence without fear – we are all a royal priesthood.  Everyone in the church has a ministry – we are all ministers of the Gospel.  In Church Meeting we work out what that ministry is.

For we hold that a person is justified by faith apart from works prescribed by the law. (NRSV)

Before Luther people were taught that salvation was earned by giving money, building churches, or performing good deeds.  Luther questioned these beliefs and taught that because Christ died for our sins we can know that God’s grace cannot be earned: it comes by faith.  Why does God save us by faith alone?  Because faith eliminates the pride of human effort.

In the Reformed tradition the church is reformed and ever reforming.  We follow a Risen Christ, Risen Lord and Holy Spirit, and not public opinion.