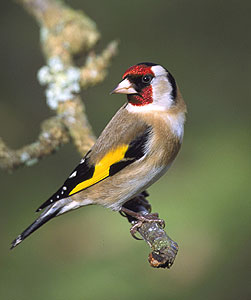 The goldfinches are back on our seed-hopper.  We can see them from our patio window.  They are a joy to behold, with their bright red faces and a vivid yellow flash on their black wings.  As this window faces west, I can sometimes pause to contemplate the glow of the setting sun.

Useful things, windows.  For one thing, you can gaze out of them whilst you’re thinking.  Someone said that an author is never busier than when he is gazing out of his window.

In the 14th century, an anchorite or solitary would live in a cell.  One such solitary was Julian of Norwich.  We learn that Julian’s cell had three windows, two interior and just one which looked out on to her fourteenth-century world.  It was through that window that Mother Julian communicated with the many folk who came to her for good counsel, an important part of her anchorite commitment.

In her splendid paperback book, ‘In Search of Julian of Norwich’, author Sheila Upjohn suggests that ‘the demands of people at that window must have been as irksome as the telephone is today’. 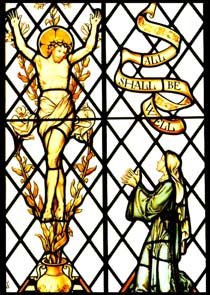 But that didn’t hinder Julian from writing her precious manuscripts and editing them before re-writing them and – let us hope – gazing out of her window as authors are wont to do.  Here, let us recall that Julian was the first woman to have a book published in English.

In her book, ‘Revelations of Divine Love’, Julian offers all of us her good counsel when she says, ‘For our Lord wants to have the soul truly converted to contemplation of him, and of all his good works in general.  For they are most good, and all his judgments are easy and sweet, bringing great rest to the soul… for everything which exists in nature is of God’s creation” (RDL 11).  To contemplate = to think about.

Julian sees that what pleases the Lord is to see us rejoicing in his love and the life that he has given us, to our great benefit and well-being.

“take from our souls the strain and stress,
and let our ordered lives confess
The beauty of thy peace.”    (492,  Rejoice and Sing)

Looking back across the centuries, I love to think that Julian could see the bright red faces of the goldfinches from her window, her only room with a view; that after another busy day, she too might have contemplated the glow of a setting sun.